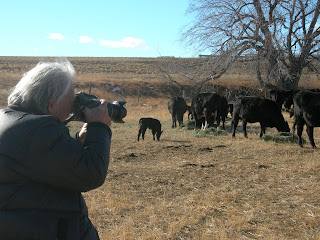 MeiMei emailed from Taiwan in advance of Mr. Chin’s visit to Montana as guests of Montana Bunkhouses Working Ranch Vacations and the Sanders Ranch. She explained to me that Dennis was a well renowned photographer and from her I learned he was technically brilliant. What I learned first hand was how compassionate he is and how interested he is in every person he meets. We all hold value to him and he makes conversation with us in a way that puts us at ease even in the face of his big lens camera.

We folded him in to our lives and he warmed our hearts. We introduced him to our friends and neighbors--took him along to be part of the seemingly endless feeding and tending of livestock that keeps a rancher busy during cold winter days. At day’s end, we played old time western music with him in the center of the group clapping his hands and keeping time with the rancher-musicians. Eyes shining with appreciation, he said “these are the songs of my childhood memories!”

He recorded the cowboys gathering the cows and sorting the heavies, their horses anticipating every move and eager to please. The newborn calf getting his first nourishment put Dennis flat on his stomach so he could get just the right angle of the life-sustaining suckle. He photographed the barren forest fire ravaged mountain top and the horses lined up for their hay, listening as we told heroic tales of those who lived the Darby Fire. And he paid attention to detail everywhere we went: the whiskers of the barn cat, the jingle bob on grandpa’s spurs, and the patterns in the wind-sculpted snow.

Big Timber was once known as the Wool Capital of the World. We visited sheep men feeding their flock. Everywhere we went Dennis asks questions. How do the sheep and cattle get along and what about the cowboys and sheepherders? Nothing passed him by whether it was matters of economics or matters of the heart.

We joked about keeping him longer – and we explained justice Montana Vigilante style. However, it was Dennis in the end that took matters into his own hands and decided to stay an extra day rather than go to Yellowstone Park. He said, Mammoth will always be there, but this [way of life is vanishing] and it is more important to be here and now. And we loved him for it.

The extra day was well spent. Armed with Julie’s freshly baked cinnamon rolls we headed to the neighbors where 4 generations of Valgamores work together raising cattle. Grandson Corby caught a sick calf with a lucky loop, as he called it, and doctored it while Dennis watched. Once again, detail was not overlooked and the tops of cowboy boots sticking out above the muddy overshoes were captured along with Grandpa Henry’s approving smile.

Then we headed to the little country school in Springdale where a half dozen little buckaroos were lined up in front of the school’s computers…cowboy hats tipped back on their heads as they continued their studies. “Everything is a circle” said Dennis, as he reflected on the generational family ranch, “and that is how it should be!” Here where the spirit is rich in tradition and hearty in hospitality.

And he told us he will be back for branding in the Spring. That makes us smile.
Posted by Montana Bunkhouses Working Ranch Vacations at 5:58 PM