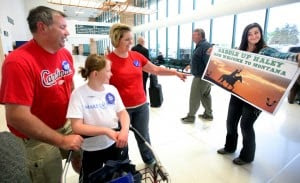 Ten-year-old Haley Fulmer turned down a family trip to an amusement park and a week at a dude ranch with gourmet food, swimming pools and tennis courts.
For her Make-A-Wish dream, the soccer midfielder from Cape Girardeau, Mo., wanted to ride a horse on a real Montana cattle drive.
Starting Saturday, Haley will hop into a western saddle at the Kombol family ranch 25 miles northwest of Roundup and help trail 400 cow-calf pairs to summer pastures in the foothills of the Little Snowy Mountains.
“She wanted more time on a horse,” said Paul Fulmer, explaining why his daughter picked a working ranch instead of a more luxurious dude ranch.
Most Make-A-Wish participants choose a family trip to Disney World.
“This was the first time Make-a-Wish in Missouri had to help plan a trip to a ranch,” Jenny Fulmer said about her daughter. “That’s unusual for kids, much less a 10-year-old girl.”
The Fulmers, including 4-year-old Cara, arrived at Billings Logan International Airport on Wednesday and struck out for the fourth-generation Kombol ranch.
Haley’s done more than watch Westerns.
Last year, her parents gave her lessons at a riding facility near their Missouri farm. The horse Babe became her favorite because she’s the tallest of the school horses and for a far more sensible reason.
“She does what I tell her to do,” Haley said.
Haley, who has leukemia, said her favorite color of horse is black with a white star, like Black Beauty, one of the many horse movies she loves to watch.
Paul Fulmer was stationed in Montana in the early 1990s when he served in the U.S. Army Reserves and now works as a civilian administrator for the Army Reserves in Missouri.
Carrie Little at the Make-A-Wish office in Billings helped to plan the trip.
“Montana has some unique activities for kids wanting to ride horses, visit Glacier Park, ski or dig for dinosaur bones,” she said.
Karen Searle, a self-described “matchmaker” who runs Montana Bunkhouses Working Ranch Vacations in Livingston, hooked up Haley’s family with Terry and Cathy Kombol.
Four days of steady rain will make the prairie gorgeous by the time the cattle drive starts, Searle said.
“Anybody with any ranching blood in their veins is cheering,” she said. “By this weekend, we’re going to be looking at shades of green that will make you put your sunglasses on.”
Starting Saturday through Tuesday, about 10 riders and as many helpers will push the cattle to three different summer pastures, rides ranging from seven to 15 miles.
After hearing that the Kombels were hosting their first Make-A-Wish rider, a neighbor offered to drive a horse-drawn wagon so Haley or her parents can take a saddle break.
“We’re so glad she’ll be coming to the ranch,” Cathy Kombol said. “They do what we do. If we’re fencing, they fence. If we’re moving bulls, they move bulls.”
In addition to cattle, the Kombols raise sheep, milk goats and feed bum lambs.
“There’s no gourmet cook, but they never go hungry,” she said, meals including homemade bread and muffins.
In 1909, Yugoslavian immigrant Matt Kombol homesteaded the first acres on what would become the family ranch. About a decade ago, the family started accepting guests seeking authentic ranch experiences.
While enjoying the sound of rain on her porch roof, Cathy Kombol said inviting guests from across the U.S., France, England, Norway and Denmark has linked her family to different cultures.
“We don’t travel. We are tied down with the ranch,” she said. “We’ve really enjoyed having the world come to us.”
At home, Haley plays with two black-and-white buddies, a border collie named Princess and Dale, a goat. Haley named Dale, whose ear tag is “88,” after the racing number used by her favorite NASCAR driver, Dale Earnhardt Jr.
Dogs are another link from the Fulmer farm in Missouri to a Montana ranch.
The Kombols used to breed border collies, Cathy said, and Spy and her brother, Ace, still run the household.
When trailing cows, Haley will ride Reba, a do-anything bay mare favored by the Kombol grandkids.
“That horse takes care of everyone on her back. She’s a sweetie,” Cathy said. “If we could find 10 more like her, we’d buy them all.”

— The wishes of more than 400 children have been fulfilled since 1987.
—Children with any life-threatening disease, not just cancer, qualify.
—Eighty percent of Make-A-Wish participants live into adulthood.
—The Billings office opened in January 2011 and serves all 56 Montana counties.
—The program has more than 50 volunteers.
— Of the funds raised, 85 percent is spent on granting wishes.
—Fulfilling a child’s wish takes an average of three months and costs about $3,900 per child.
To learn more, go to: www.montana.wish.org
Posted by Montana Bunkhouses Working Ranch Vacations at 8:37 AM No comments:


WHAT:                 Join 10-year-old wish kid Haley of Missouri as she experiences her wish of going on a cattle drive at a working ranch in Montana. Haley, who is diagnosed with leukemia, will be receiving her wish courtesy of Make-A-Wish®.

DETAILS:             Haley takes horseback riding lessons to help keep her mind away from her illness. Haley’s love for horses is apparent to anyone who knows her and she could not be happier to be riding horses during her stay at Kombol. Although the majority of Haley’s time will be spent riding horses or a horse-drawn wagon on a cattle drive, she will also be able to partake in nature walks and go wildlife spotting, among other ranch activities.

ABOUT:                Make-A-Wish ® Montana is a non-profit organization that grants wishes to children with life-threatening medical conditions to enrich the human experience with hope, strength and joy. The Foundation serves all 56 counties in Montana and granted its first wish in 1987. Since then, more than 400 wishes have come true with the help of more than 60 volunteers. For more information on how to refer children or to volunteer, please call Make-A-Wish at 1-877-574-9474 or visit its Web site at www.montana.wish.org.