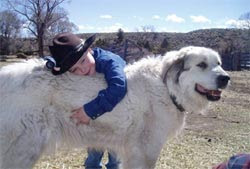 With the first cycle of calving behind us we are down to tagging only a couple of new calves a day. Still on the watch for breech or backward calves or heifers who need an assist, we continue to make the rounds throughout the day and night. But mild temperatures have kept pneumonia and scours to a minimum and it is fun to watch the calves run tails-up through the bunch, playing in the trail of hay that unrolls behind the pickup.

Lambing will start early next month. We’ve been graining the ewes so they have a good supply of milk for their newborns. Grandpa fills two grain sacks with just the right amount of barley-corn mixture. He knows without measuring what it will take to give each ewe one-half pound a day. I drive and he pours the grain from the back of the pickup into the track the wheel makes in the skiff of new snow.

We always watch for the sheepdogs and count them to see if all four are still there. On occasion they will pair off and seemingly say, “you keep watch, we are going for a stroll” and then it will be the next day before our count totals four. We are relieved when we can spot each of them because it is one more day we can be thankful that the wolves have not made it to our ranch. With a lump in our throat we realize the sheepdogs will sacrifice their lives when that first wolf attacks our sheep and we know it is just a matter of time before it happens.

On this day we are surprised to find six Great White Pyrenees dogs guarding the sheep. Six tail wagging swaggering companions making their way to our truck for pats and words of praise. We are so enamored with them for their devotion to the sheep, out here in the wild with no comforts as they protect the flock day in and day out. I am puzzled by the two extra dogs but Grandpa says the neighbors to the east are shearing today and maybe their dogs did not like the commotion or maybe the dogs from the ranch to the west just came for a visit. He hopes that we always have neighbors who are tolerant of an occasional visit by these dogs because they don’t necessarily stay in the fence lines.

Cheyenne is the first to arrive, excited for pats she leans her body on mine, caressing me as she bends around my leg. Next comes Zac, the only male; he is one-fifth larger than the others. We purchased some sheep from friends who live near Yellowstone Park a little over an hour away from our ranch. They live in wolf country and after suffering numerous losses, sold their sheep … Cheyenne and Zac were part of the deal. When Zac first came to the ranch he could only tolerate being touched from across the fence but now he trusts us and has been a friend since those first pets. More gentle and more friendly than ever before, he has put on weight and his coat is thick and shiny. He looks regal as he lifts a massive paw to get my attention.

Yukon enjoys life more now since she is feeling better. Two winters ago she was in poor condition but the vet treated her for parasites and now she comes playfully prancing and jumping up and down just out of reach of Grandpa. She has not forgiven him for rides she made confined in the cab of his pickup on her way to and from the vet. Or for the times he enticed her with hot dogs and retrieved her from his cousin’s ranch when she strayed across the Yellowstone River. However she eventually accepts a pat and then scampers away.

Last to come swishing her tail seeking attention is Zsa-Zsa the matriarch. The ranch has been her home since she was one year old and that was over ten years ago. Grandpa was having a lot of coyote problems in those days and he was willing to try guard dogs. David Myrstol raised some Pyrenees Dogs on his sheep ranch just down the river. He said Zsa-Zsa was the pick of the litter.

Today Grandpa’s affection for Zsa-Zsa is evident as he takes her head in his calloused hands. He recalls how before the guard dogs, he used to have a 30% predator loss by the end of the season even when he was putting his sheep in during most nights. The government trapper would come and kill three or four coyotes and he would think it would be ok to leave the sheep out and then coyotes would again kill three lambs. Always three lambs, never just one.

Back in the ‘80s Grandpa completed the week of school necessary for him to handle the toxic collars filled with 1080 poison. In those days he would carefully brand 20 or so sacrificial lambs, fit them with 1080 collars, and leave them out at night. Each morning he would count the lambs and document, document, document the kills and send in reports. There was comfort in the loss because with each death of a collared lamb, you knew you were getting a killer coyote. Just having the government trapper kill coyotes often made matters worse because he did not know which the killer coyotes were. You are always going to have a certain number of coyotes around and eliminating the non-killers just made more room for the killers to multiply. However all of this did not eliminate the killing, it just kept it manageable.

The sheep were grazing up on the bench when Grandpa turned the first young guard dog loose in the fall of ‘93. The sheep took one look at the big dog and they never stopped running. They ran until they could not run anymore. That first day was a mess; Rick did not know if it was going to work. Zsa-Zsa was not socialized to humans so he could not simply catch her to stop the fracas. The dog stayed right with the sheep…kept running with them where ever they went and it took the sheep almost a week before they could relax a little. Eventually they accepted her and now follow her lead into the sheep shed or to new pasture. She is always on a lookout nearby when the sheep bed down atop a knoll overlooking their pasture. Always on guard.

Grandpa is filled with emotion as he strokes Zsa-Zsa. He talks in soft tones telling her that she is a good dog and he is proud of her. He reminds me that he has not had a sheep killed by predators since she came to live and work at the ranch over ten year ago. 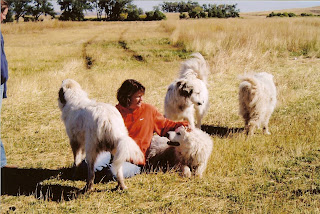 And then he is quiet for a time looking off into the hills before he clears his throat and says with a husky voice, “the forecast is for snow showers later in the week with some wind in the next day or so but they’re not really expecting cold temperatures.” I nod.
He gives a final pat. We both know he is not thinking about the weather. He is thinking about Zsa-Zsa and her years of faithfulness. He is thinking is about the love and respect we have for the dogs that guard our sheep.
Posted by Montana Bunkhouses Working Ranch Vacations at 1:40 PM